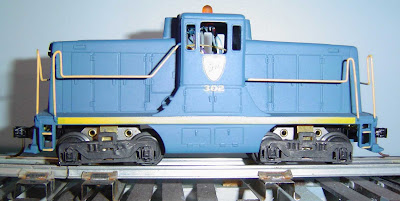 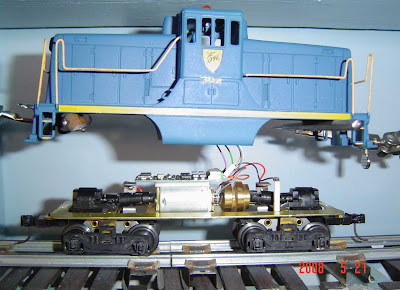 ~~~~~~~~~~~~~~~~
>At 12:57 PM -0400 5/21/08, Glenn Ritter wrote:
>Hi Jim,
>Did you ever finish your 44 Tonner?
>Can you post a picture?
>Glenn
~~~~~~~~~~~~~~~~
>On May 21, 2008, at 11:21 AM, Alan Evans wrote:
>The gray resin 77 Tonner body was done by American Hi Rail (Tom Hodgson),
>the drive was from Pennsylvania Heritage Models and Steam Depot sold the
>units.
>- Alan Evans
~~~~~~~~~~~~~~~~
At 11:30 PM -0400 5/21/08, James Ingram wrote:
This S gauge, GE 44 Tonner came from Steam Depot, back in the late 1990's.
The painting and body assembly was done by a deceased gentleman named Dave Maggs. The DCC decoder and blinking light on top of the cab were installed by Fred Cupp of Williamsport Pa.
Astute rivet-counters may correctly note that D&H (Delaware & Hudson) never had a 44 tonner. But I like D&H equipment and there's not much available in S gauge, so I exercised the privilege of "artistic license". ((Note all the work on this engine was actually done by others, as I myself have the modeling skills of a 3 year old.))
I don't run this engine very much, as it frequently STALLS, as it does not seem to pick up the current from the track well. Other peoples' models of this same engine seem to exhibit the same stalling tendancy. I was thinking of connecting and wiring it to a freight car equipped with SHS caboose trucks for additional electrical pickup; sort of like Jerry Dobbs was mentioning a few messages back.
I've also got one of the Putt Trains small diesels, but it also seems to suffer from similar electrical pick up problems, and does not seem to run particularly well.
===== ADDITIONAL RAMBLING: =====
I personally think it would be great if S gauge had some small diesels and small 0-4-0 steamers with EXCELLENT pickup and running characteristics that could negotiate sharp curves -- sort of like the short engines that LGB made in LargeScale. These LGB engines ran extremely well, but would go around tight radius curves. (LGB used "sliders" for additional pickup, low gearing, and high quality motors, to get smooth, no-stalling, constant speed running characteristics.)
(("Old timers" on this list may remember that we had a discussion about this "running trains on small radius track" stuff back around February of 2000, but I was requested to stop discussing it {referring to Message 6996 dated 2/8/2000 in the archives}, so I've shut up about it as requested.))
If you've seen any of my YouTube automatic control videos (under YouTube user 'jim17701pa') where we run up to 5 LGB trains on the same track, the controls can successfully operate the trains, because of the LGB engines' dependable running characteristics. Trying to operate these same type of automatic controls systems with some of the S gauge engines -- the way they "sputter" and stall and bog down on upgrades and race down the downgrades -- would be nearly impossible.
However, we've recently started experimenting with using some of these automatic controls in S gauge -- using S-Helper diesels, and vintage American Flyer steamers retrofitted with the SnS half-speed can motors and 8-wheel pickup via retrofitting SHS caboose trucks on the Flyer tenders, and it seems like getting these controls to successfully work in S gauge may possibly be do-able.